“Everyone has talent. What is rare is the courage to follow that talent to the dark place where it leads.” Erica Jong

So today I want to talk about how HARD is this thing we do — this creative pursuit. This thing, incidentally, that we both don’t have to do and have to do at the same time. As Frida Kahlo once said: “I am working, but even that, I don’t know how or why.” Here is a picture of Frida who, by the way, was (sorry to be a typical mum, but …) much prettier than she saw herself

[book excerpt] “There’s a reason so many great artists commit suicide. It isn’t only that they are ‘sensitive souls’ — although that doesn’t help. … No matter how brilliant you are, you are going to lose confidence, you are going to face rejection. As many people will want to pull you down as lift you up. It takes supreme faith — in your ability, in the universe, in God, in whatever it takes — to keep you going.”  [end of book excerpt]

Which brings me to the hardest thing of all … the feeling that we are crap and why on earth are we bothering to visit upon ourselves, let alone others, our crapness.

I, at various times, run the gamut of emotions from “in the moment” (which, in my opinion and more on which later, is the thing to aspire to) to utter crap. After recording one of my (now) favorite CDs I left a message on my boyfriend’s voicemail, sobbing about not only how CRAP I was (note those capital letters), but how “ugly” too — you know, just for good measure. He, having just emailed me (I hadn’t read my email yet) about how great I’d sounded and how excited he was to hear the finished thing, was absolutely bewildered. And my dear friend Sue, responded to my emergency call by tearing over, superheroine-black cloak-like coat flying behind her, pen and notebook in hand, to listen to “the horror” and, perhaps, whiz around the world backwards a few times to reverse time so I could do it again properly.
“Oh thank God you’re here,” I said, when she arrived, plonking her on the sofa with a cup of tea and the CD controller, while I busied myself in the bathroom, generally removing fistfuls of hair, scratching at my face and howling, kind of like Jane Eyre’s Mrs Rochester in the attic — but without the laughing or the matches.
So … drawing a discreet veil over the utter self absorbed bollocksness (er … speaking of self-flagellatory) of my initial reaction (I mean, like there aren’t people in the world with real problems, for crying out loud), I’d like to address the “problem” of being so down on yourself that you don’t even take up opportunities that are offered to you, let alone pursue any — either because you are so sure of your own crapness, or because you self-sabotage. 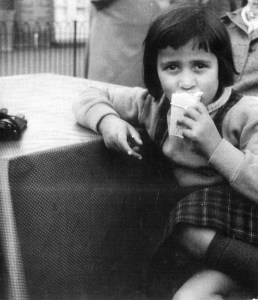 I spent my entire childhood feeling like a gangly orangutang next to my platinum blond brother with the adorable smile (don’t get me started on my wonky teeth!) … Here is a gratuitous picture of me in my gangly orangutan days just to give you some perspective. Given that I feel like I was born feeling inadequate, it sometimes strikes me as just plain weird that I have chosen to pursue not one but two careers one after another (journalism, then music) that depend on outside approval for their success. Actually, maybe that makes profound psychological sense, after all. But, whatever, being dependent on outside approval for success can make for a bit of a roller coaster existence, with fabulous periods of elation (a standing ovation from 1500 people in Moscow … that was fan-TAS-tic!) followed by just as long, or longer, periods of despair, for no reason whatsoever.
I have come to the conclusion that the necessary dredging up of the innermost depths of your being that goes with the territory of being creative hurts. Especially when it brings forth emotions that you didn’t even know were buried deep down in there. For me, increasingly, being a singer is less and less about getting approval and more and more about making a connection.
It’s not about delivering a perfect performance. Mark Murphy said to me once that audiences aren’t there with their arms and legs crossed (I paraphrase, but this is the gist) thinking, “Show me!” They are there to have a good time. And they aren’t there to hear how long we can hold a note, or how many million notes we can fit in to a phrase — unless that is an expression of who we are. Because our job, whether writing, singing, painting, playing, is to give them that good time. And to connect/express/be understood/understand/teach/learn from the innermost depth of who we are.

The idea is to be “in the moment” to the extent that it ceases to be about ego and You. In fact, You (as little Billy Elliot puts it in the movie when they ask him why he loves to dance) miraculously and absolutely “disappear.” I saw that movie before I became a performer and that remark slipped right by me. When I revisited it recently, hearing it again felt like pocketing all the snooker balls in one go with one hit. Because that is exactly what happens when you are “on”. You no longer exist as a separate entity. You are just part of one big “it” — whatever “it” is.

We are a work in progress. Not perfect, finished short stories/poems/songs/paintings. It’s more ongoing and “human” than that. Some gigs are amazing. Some are … well, some are not. Sometimes a sound system can let you down. Or you are distracted. Or under-rehearsed or you are in self-hating Orangutang mode where no matter that you have adorable little legs with knee socks and cute, badly cut bangs (Mum!), you are going to use that icecream cone to hide those wonky (or perhaps at this age, missing) teeth.

Which brings me to perfectionism – which is both our best friend and our deadliest enemy. Perfectionism is what inspires us to keep growing as artists. But letting perfectionism take over is always counter productive. You are there for the people in the gallery, not just for yourself. If you are giving them pleasure and they are loving it, that’s perfect enough. I know an amazing, amazing musician who whenever he got compliments from the crowd used to bat them away if he didn’t feel he had played well — forgetting that most of us aren’t looking for perfection, let alone that most people aren’t even hearing the mistakes.

We have to learn to receive that Love, for want of a better word. The correct answer when someone says they love you isn’t “No, you don’t!” Or “You don’t know what you’re talking about. I’m crap!” Or “What are you? Deaf and blind?” The correct answer is “Thank you!”
So here are my ten things to do when you are down on yourself:
1. Practice. Not to be perfect but to be better able to express yourself unbound by technique issues
2. When a self-flagellating thought enters your head just say “Stop!” and focus your attention on something in the moment. Last night I noticed that my sorrel or cabbage or whatever it was I was cooking was the most amazing green with dark red veins. Almost too beautiful to eat!
3. Don’t beat yourself up about feeling bad/envious/crap/hopeless/unworthy/fill in your own unhelpful emotion (and please don’t put on your music when you’re feeling like that!)
4. Rent a cathartic video. I love Billy Elliot. I cry. I laugh. I look like Alice Cooper by the time it’s finished, but I feel absolutely spent
5. Remind yourself that sometimes you might be down on where you are now because you are about to move to the next level
6. Rest/have a hot bath/massage/morning in bed
7. Call a kind friend. Not one of those “other” kind. You know exactly who they are – and the urge to call that other kind is simply more self flagellation!
8. Take a break. Go for a walk (actually exercise is great if you can face it — just don’t use your inability to go to the gym as an excuse to hate yourself even more!)
9. Do something self-esteem raising (er … how about going to the gym? If you want. Be self-kind)
10. Take yourself on what Julia Cameron, in her essential The Artist’s Way, calls an “artist date” — e.g., to a museum/show/gig. Not reading a book but going actually out somewhere and getting dressed up as if you are going on a date.
But most of all, get over yourself! Yes, darling, I’m talking to you! Okay … and me.
Loading Comments...