“Tessa enjoys a high level of rapport with her listeners, some of whom turn up at just about every gig, regardless of venue, or even country in some cases.” HOTHOUSE, MARCH 2017. ‘TESSA SOUTER: INTERNATIONAL WOMAN OF MYSTERY’ BY ELZY KOLB READ

“I don’t remember ever feeling that way about a song, or a singer, until now, that is, as I listen to Tessa Souter . . . her gifts in communicating music directly from and to the heart is truly special.” JAZZDAGAMA SEPTEMBER 2016, TESSA SOUTER: HEART MUSIC BY  RAUL DA GAMA READ

“She leaves her audiences feeling as though they’ve just experienced something very special.” LOS ANGELES TIMES, OCTOBER 2015. ‘A JAZZ VOCALIST WHO IS “ORIGINAL IN EVERY WAY” READIES FOR RARE PERFORMANCE BY KIRK SILSBEE  READ

“Souter is a beguiling artist who infuses everything she interprets with voluptuous intelligence and keen emotional insight.” ‘SEARCHING FOR MUSIC IN THE SOUTH BAY LEADS TO GREAT DISCOVERIES’ KQED ARTS, OCTOBER 2015, BY ANDREW GILBERT READ

“Tessa Souter is a jazz singer who truly embraces her audience” WOMAN AROUND TOWN, JULY 2013, ‘PROUST QUESTIONNAIRE: TESSA SOUTER – A JAZZ SINGER SOUL AND SO MUCH MORE’ BY CHARLENE GIAMETTI  READ

“A singer of rare poise and intelligence, Souter has distinguished herself over the past decade or so as one of jazz’s most interesting vocal artists.” SAN JOSE MERCURY NEWS, NOVEMBER 2012, ‘TESSA SOUTER MIXES MUSICAL GENRES’ BY ANDY GILBERT READ

“The beauty of this project lies in the synergy of melodies, lyrics, and Souter’s consummate musicality, carried by her clarion, gently burnished timbre.” CHICAGO EXAMINER, OCTOBER 2012, ‘NO DEBATE: VOCALIST TESSA SOUTER’S CHICAGO DEBUT PROMISES A WINNER’ BY NEIL TESSER  READ

“An album with a concept that took Souter to an entirely new place.” BOSTON GLOBE, MAY 2012, ‘TESSA SOUTER ADOPTS CLASSICAL AIRS’ BY SIDDHARTHA MITTER READ

“It is not simply that words seem to flutter from her lips with all the shimmering delicacy of a Blue Morpho, but also that she spreads sentiments like pollen across a veritable field of musical touch points.” ECMREVIEWS.COM, MARCH 2012, ‘OF BEAUTIFUL BOYS AND ELEGANT GIRLS: A REVIEW AND INTERVIEW BY TYRAN GRILLO READ

“There have been thousands of renditions of songs from the Beatles songbook, but few with the intense delicacy of Tessa Souter’s ‘Eleanor Rigby’.” WALL STREET JOURNAL, FEBRUARY 2011, ‘VOICING HER PLEASURE’ BY MARTIN JOHNSON READ

“Her diction is flawless, making every syllable count. It’s an almost actor way of singing, so much so that I wrongly supposed that Souter had dramatic experience.” EERIE TIMES, AUGUST 2009, ‘LET THE SONG TELL ITS STORY’ BY JOHN CHACONA READ

“Souter, who stunned audiences with her ethnically hued ballad singing at the 2007 Rochester International Jazz Festival, will return this year to do the same.” ROCHESTER DEMOCRAT AND CHRONICLE, JUNE 7, 2009, ‘BRITISH INVASION’ BY ANNA REGUERO READ 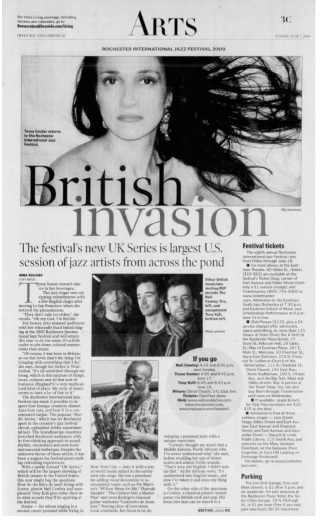 “When Tessa Souter walks into the spotlight at London’s Ronnie Scott’s and begins to perform, she does so with such confidence, elegance and utter professionalism that it is impossible to believe she was ever anything but the self assured singer she is today.” YOU MAGAZINE, MAIL ON SUNDAY, JANUARY 2006, ‘HOLD ON TO YOUR DREAM . . . AND ALL THAT JAZZ’ BY JANE GORDON READ

“Listen Love covers some interesting territory… a lyrical romantic theme combined with quite a strong Spanish flavour. I was wondering where that came from.” JAZZ RAG, JANUARY 2006, ‘A BRITON IN NEW YORK’ BY LES TOMKINS  READ

“Still, Ms. Souter is undeniably a jazz singer. When she does ‘Caravan’ she stretches notes to suggest pentatonic chanting, accompanied by guitar and bass mimicking Middle Eastern instruments.” NEW YORK SUN, SEPTEMBER 2005, ‘A NEW WAVE OF FEMALE INNOVATORS’ BY WILL FRIEDWALD READ

“Souter may have been genetically predisposed to the blend of cultures reflected in her music, which contains Middle Eastern, Brazilian and flamenco elements in an airy jazz framework.” PHILADELPHIA CITY PAPER, AUGUST 2005, ‘NO MASTER PLAN” VOCALIST TESSA SOUTER TAKES A ROUNDABOUT ROUTE TO MUSIC’ BY SHAUN BRADY READ

“Critics have been gushing about her live performances and her self-produced debut, Listen Love.” BOSTON GLOBE, AUGUST 2005, FROM KARAOKE BARS TO THE LINCOLN CENTER, ALL SHE NEEDED WAS A START’ BY BILL BEUTTLER READ 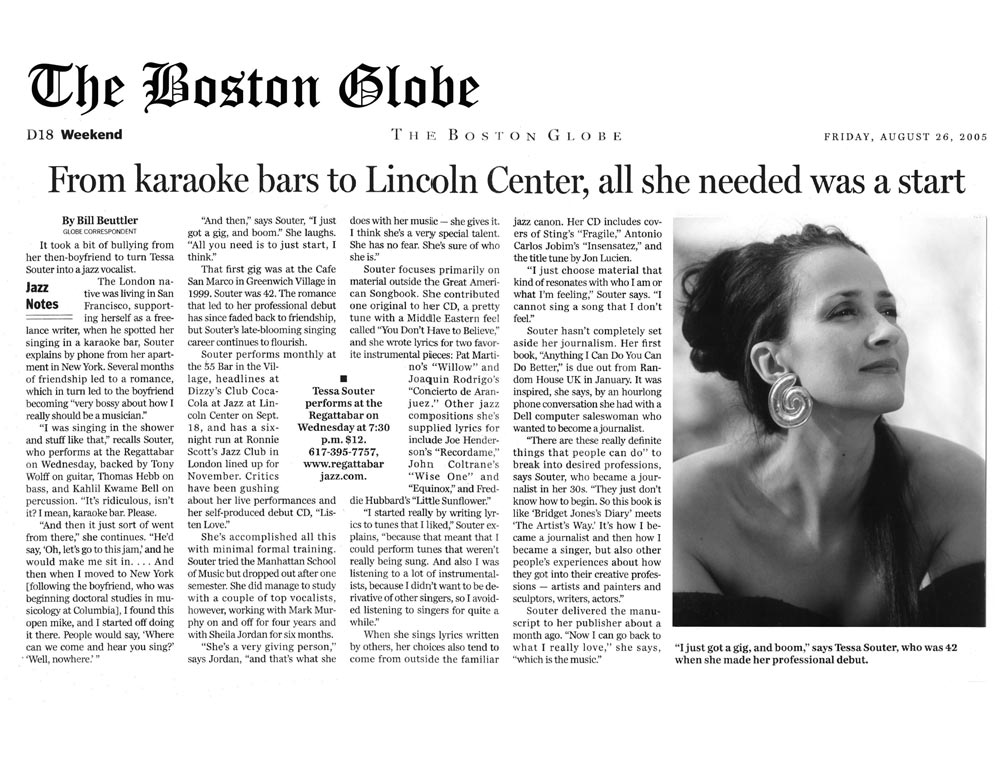